Where to start!  I ended up racing the heavy Rig after contemplating getting a lighter bike built up at the last minute but decided not to in case the fit wasn't right.  I knew deep down it was the right decision, especially with some of the dodgy descents at Cohutta and not wanting to cramp in weird spots when climbing on a new bike.

Anyway, I love Cohutta because it's a fun road trip down south.  I never realized it was so nice in Tennessee and Georgia  (although I am told that it is nice because when I am there it is Spring!).  We almost have a tradition now of leaving Thursday morning to reach Asheville North Carolina by evening to stay with one of Rich's friends and take advantage of the great restaurants.  This year we were delayed in getting to Asheville because of the tornado destruction in Virginia (which is devastating).  We ended up stopping at some cool acoustic cafe in Johnstown NC, and were surprised by the good food and music (and bonfire.....).

Breakfast on Friday morning was at the Sunny Point cafe in Asheville which is delish and worth a visit if you are ever there (sorry no photos, too busy eating!)

We usually get the same cabin each year in Tennessee which is gorgeous.  This year it was gone, but the one we got was still very nice with a huge porch and of course a hot tub! 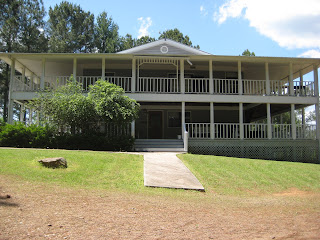 We got to registration on Friday afternoon, got kitted up and went out to pre-ride. 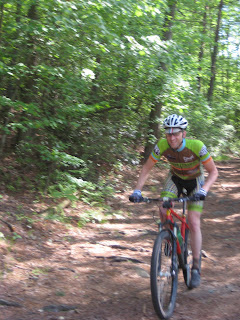 Local SS champ Matt Ferrari getting in his pre-ride

We enjoyed some good home made food on Friday night at the cabin, Jim Malta joined us, as did Nick and Nicole, before early to bed. 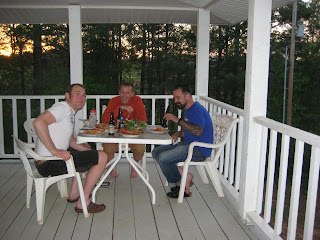 Race morning was like all other 100 milers.  5am wake up, force down some breakfast, arrive at the race in the dark, try and warm up.....then....GO!

My start was as ever was not the best. Cohutta is a 3 mile paved climb start before you hit single track for 10 miles.  I always shy at the back of the group, scared or embarrassed to go to the front.  I guess I don't think I am that good, who knows.  But I should because I always end up passing a bunch of people and nearly making the fast train to the trails, but not quite.  I ended up getting stuck behind a guy who was not in anyway riding that slow, just not fast enough.  We ended up with about 15 people building up behind us, including 2 woman.

I eventually asked to pass the guy when I knew there was some climbing coming.  James Kelly from SC was behind me, encouraging me and hooting and hollering in the trails which made it more fun.  That was until I ended up getting chain suck!  One of the woman behind passed me as I fixed my bike.  I caught back up to being close to her, and settled into a rhythm as best I could for the endless climbing that was to come.

It wasn't that I felt bad, just not great.  I couldn't find the right gear to climb, I was spinning far too easily.  Then the descents were sketchy as a kids sketch book...all over the place!  At that point I lost sight of 3rd place woman. The biggest climb starts around mile 30 and goes until mile 50 where there is an aid station.  The folks at aid 3 told me 3rd place was 2mins ahead.  I was hoping that I might be able to catch her, but since the fireroads are bad (not like the tight packed ones we have here) I knew my chances were not that great as she is pretty good at descending.  The roads were worse than ever, super lose, with massive ruts, water banks, trucks driving like maniacs, and this year they had dumped a ton of gravel on the surface which made breaking really risky.  So as well as fearing for your life (some people got really knocked up this year) believe it or not it starts to get really boring.

After the descent there is a flat section for about 10 miles along where I continuously fear I will be caught by woman who have caught a man train.  I am always relieved to start the first of the next 3 big climbs.

It was after the first of those three climbs that things really started to go wrong!  I saw a sign with arrows pointing which direction we were to go.  One was downhill and one was uphill.  Unfortunately I went uphill, which was the wrong way!  I climbed for a good while before I realized that it seemed offly quiet!  I turned around and descended, all in all wasting about 8 mins ride time (+ a lot of emotional time!).

I was hard on myself for a bit, especially when I started the next real climb and realized I had shot my legs my sprinting to get back on course.  It took me ages to catch people I had passed literally about 45mins before.  But I pulled myself together, rode the singletrack with a positive attitude and finished the race as best I could, crossing the line in 4th place at 8 hours 35 mins.  I really think I would have been 20 mins faster had I not got lost, but hopefully lesson learnt and I will pay more attention next time! 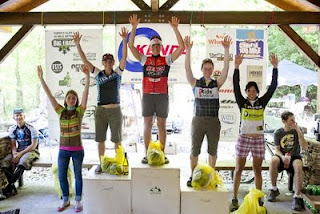 Amanda Carey finished the race in 7.5 hours, super fast.  Cheryl was looking great off of Cape Epic to take second, and Karen Potter extended her lead over me finishing 3rd.  Was nice meeting Namrita for the first time too, who finished 5th on the day.  Great bunch of woman.

After some hot tub bathing, food and a few beers on Saturday night we got to bed early.  On Sunday morning we hit the road again stopping Asheville for more yummy food and a look at the markets 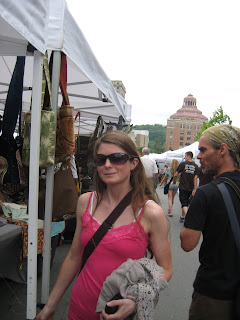 My 'I do more than rides, I shop at Sunday markets' look!

Rich was a champ and did all the driving and I am so thankful!

This week I am recovering and heading to Scotland for a couple of weeks to see the most important woman in my life...my mum.  It's been too long and she has not been well.  I hope to get some time in on the trails (as they are awesome!) when I am there to get ready for Trans Epic (just not on trans epic trails!), but for these next few weeks my focus is really not the bike but my family. 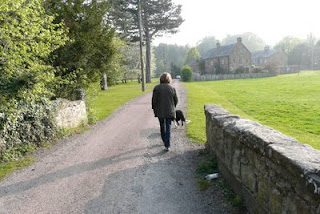 My wonderful mum
Posted by Vicki Barclay at 10:25 AM