No lead in sentences or suspense stories for this blog entry!  I am unbelievably happy and astonished to have won the Wilderness 101 this past weekend, my first NUE top step appearance. 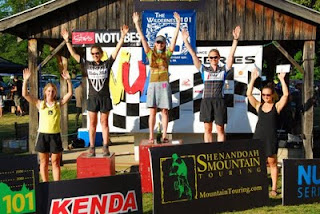 In my last blog, I mentioned that I had taken a different approach towards the 101 this year.  Namely, that I wasn’t going to put in long races or training rides 2 weeks prior to the event, but instead rely on my winter endurance base and the boosts I attained from racing Trans Epic and other 100 milers.  Instead I decided on keeping my legs fast and fresh: it worked.
The week leading up to the race I felt really positive. I had the same mental and physical sensations before I won Iron Cross 2010.  I really could envisage winning the race.
The race starts with a rude awakening hill climb, which usually gives you a sense of how the body is feeling.  I started near the front and kept Cheryl in sight who was charging with the lead men.  I saw her fall off the pace a little, so I steadily worked my way up to her group before the climb crested.  I felt great and couldn’t believe we had reached the top so quickly.  As we moved along the undulating fire roads I tucked in behind Cheryl and the guys pace lining.  I made no accelerations; I drank, ate a little and remained calm. 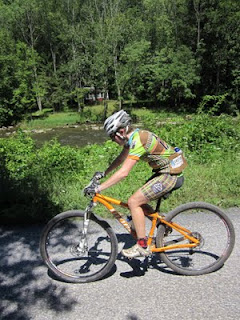 In this group of about 6 was Stephan Kincaid, a friend of Rich’s who I had met for the first time the previous night.  I knew he was an exceptionally strong road cyclist (understatement!) and adorably friendly, so I stuck on his wheel.
As we passed through aid #1, I grabbed a fresh water bottle and stuck like glue to Cheryl’s wheel.  I felt really comfortable climbing out of Penn Rosevelt but thought it was too early to put in any attacks.  On Detweiller decent, Rich flew past Cheryl, Stephan and I. As we climbed Bear Meadows we closed in on Rich and by the time we hit Longberger Path we were all in a tight group again.  Over the three bridges we paraded.  My sister and her family were watching us all fumble over the rocks after the bridges. I gave a quick smile and was quickly off again. 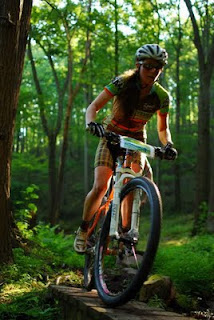 Cheryl, Myself and Stephan Kincaid

As we climbed up Laurel Run, I started to feel even stronger.  I decided that I wanted to move faster than we currently were.  Perhaps I was scared Karen Potter was fast approaching from behind!
I was first of our group to hit Little Shingletown Trail.  Soon Rich, Stephan and Roger Masse passed me and I grabbed their wheels and we pace lined towards aid #2 without Cheryl.  I was in and out of aid #2 fast, Stephan was close behind.  He caught up to me and asked about the climb (Greenlee). I told him it was really long and got my head down and legs a pedalling!  As the climb went on and on I heard Stephan saying ‘this climb sucks..’.  Yes it does!  I climbed solo to the top and to my surprise and delight my sister and the family were ringing cowbells!  That made my day! 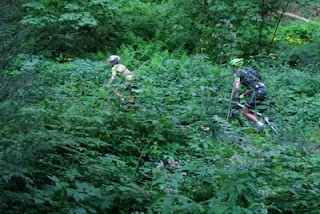 I descended Croyle first passing Chris Beck who was fixing a flat.  I hit the road at the bottom, shifted up to the big ring and powered as best I could towards the base of the next climb. Soon Stephan and another guy passed me. Again, I hopped on the wheels.  A pattern was emerging which suited me fine.
This was where the first route changed occurred.  Normally we climb Seager and then descend Telephone trail.  This year we kept climbing Seager up to Broad Mountain Road to aid #3.  At this point it was only Stephan and I. David Walrath who was on the moto then rode with us to make sure we made the left turn onto the connector trail to Sassy Pig.  I lead the way, and eventually picked off at least 2 guys.  The inside of my legs started to twinge with cramps.  Horror!  I never cramp. I assured myself it was just the transition from really only being on fire road climbs until this point, to having to power through the rocky trails. I sipped some electrolytes and the warnings soon left my body.
Descending Sassafrass trail to Lewistown Contingent trails felt great.  Sometimes I lose it in Lewistown as fatigue sets in.  I only went off the trails once but no crashes!
As we hit the climb up towards Beautiful trail I heard some folks coming fast out of the woods behind me.  I prayed it wasn’t Cheryl or Karen.  Later I was to learn that it was Roger Masse. 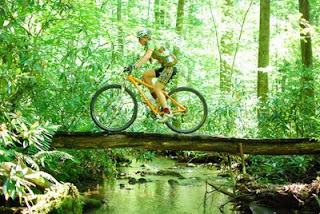 I took the lead again along Beautiful and down No Name trail.  I am always relieved when No Name is over!  The folks at aid #4 were so helpful and I was in and out once again in no time.  I pulled away from Stephan on Still House climb.  I could hear him starting to struggle and I couldn’t risk slowing down.  David soon came up beside me on the moto to tell me I had at least 7 minutes on 2nd place.  I thought 7 minutes is nothing! Brenda was 8 minutes back on me at this point last year and still caught me at the end.  So I put in some harder peddle strokes (sorry Stephan!).
After Still House (and the trails after the climb) the course changed for the second time.  Instead of descending down through Poe Paddy trail, we climbed up Sand Mountain.  It did add a lot more time climbing, but I was reasonably happy as I had been up this climb during Trans Epic, and my body was responding well to fire road climbs today.  Eventually we made our way onto Pather Run trail, a very lose sketchy double track with big rocks and huge potential to really injure yourself.  However, I had to keep the gas on in case someone was catching from behind.  I hopped a rattlesnake and feared for my life (hate snakes!).
Soon after Panther Run was aid #5.  I usually don’t stop but I have learned the hard way in previous years that the last climb can suck all remaining energy, energy that is required to lug one’s bike through Fisherman’s path!  So I gulped down some coke (thanks Grant and Denny!) and promptly left.  Soon after, Stephan caught me again along with another geared rider and eventually Jorden Wakeley (who was having an astonishingly good ride in the SS class).  We paced lined to the last climb.
After the climb, I ran most of Fisherman’s path, took my mandatory fall in the last tunnel (thanks for picking me up Jorden!), smiled to Abe Landes photography, and before I knew it I was on the final home stretch with Chris Scott riding beside me taking photos.  I was knackered at this point.  Chris was asking me all sorts of questions and I was barely able to speak (sorry Chris!). 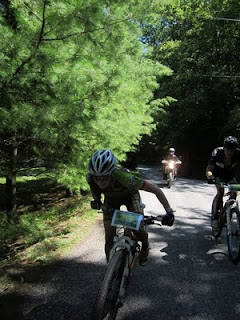 I turned into Coburn Park and was astonished when I crossed the line and the timer read 7hours 42 mins!!!  I purposely hadn’t looked at my watch all day, and nearly fell off my bike when I saw the time!  Rich’s mum and dad were there waving Scottish tea towels (this is what my own mother does when I race!).  I was delighted to see them.  I hugged Stephan, we had had such a great day riding, despite never having met each other before.  He seemed psyched to have finished in such a great time.  I was psyched when I discovered I was in the top 20 men! 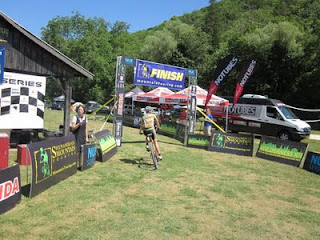 Matt Ferrari and Gerry Pflug were hanging out at the finish.  I didn’t realise I was only a two minutes behind Matt, if I had known I would have tried harder NOT to lie in the last tunnel for so long!!!
As I crawled into the Stan’s van to change, I discovered I had a text message from Cheryl.  She had dropped out at aid #2 due to illness which totally sucks. I hope you feel better Cheryl!
In the end, Brenda finished 2nd with Karen in 3rd.  I was also really really happy to see that Jess Kutz, a young Freeze Thaw rider had managed to get 4th on the day.  Awesome job Jess!  Now, if I can just convince her to do some more 100 milers!
Rich didn’t have such a good day because of the extreme heat and humidity.  I am sure he will be back another day to show me who is really boss, but until then I will quickly revel in beating him!
This week has been manic with the family visiting and trying to work, so I have taken a break from any serious training and will get back on it next week.  The mental and physical break has been welcomed, but I am excited to ramp it up again in the following weeks.  Question is: should I race Fool’s Gold in Georgia in 2 weeks?
Posted by Vicki Barclay at 8:16 AM