Cross racing and other good stuff!

Blog writing has been a little sparse of late, but it’s not from a lack of racing or riding, just a lack of time! 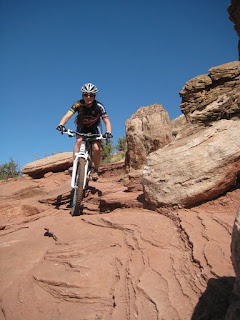 Riding In Moab
Since Shenandoah 100 I have: recovered from my awful back spasms (doctors and physio’s helped); visited Las Vegas and InterBike; raced Cross Vegas (industry race); ridden in Moab and a couple of other places in Utah/Colorado; driven (well I didn’t drive but I was in the van!) across the USA; raced in a MAC series cyclocross race; started running and swimming; raced Iron Cross and started a new job!
In brief, InterBike and Vegas were a blast and it was so nice to hang out with the NoTubes gang at their booth.  Cross Vegas was frightening….but fun (think stampede).  I won the woman’s industry race, but I couldn’t take it too seriously (gin and heels night before didn’t help).  Eric Sorensen from Las Vegas TV interviewed me before the race.  I was kind of like errrr maybe you should be interviewing Kelli Emmet in the tent next door! Eric did a great job of capturing the spirit of cross.  Check it out here:
http://www.youtube.com/watch?v=LJya1aFPzKs&feature=share
After Interbike, Rich, Richie Rich and I headed in the NoTubes sprinter (that van attracts so much attention, lots of questions on how the technology works from the public at petrol stations!) to Moab, Utah, to meet Mike Bush and his girlfriend Amanda.  Mike arranged for us to take a shuttle up and descend ‘the whole enchilada’ on big hit bikes.  The pictures speak louder than words; it was EPIC! 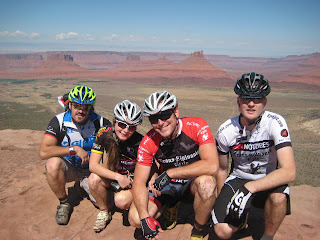 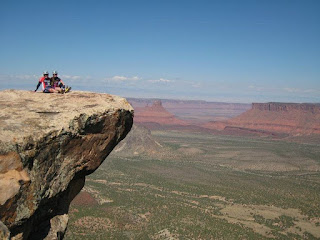 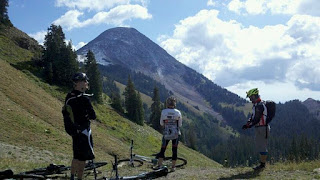 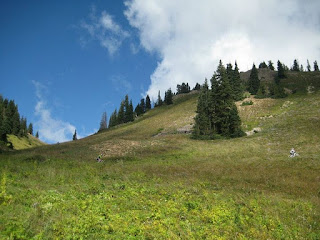 The MAC series race, WhirlyBird, reminded me how much fun and ADDICTIVE cross racing is.  It is so nice to go hard for a short time (as apposed to going hard for 8 hours!). At Whirly, I was pleasantly surprised to immediately break away with the top 5 woman.   I love the tactical side of cross racing, though my tactics (according to Rich) need some work!  I am running the Stan's Alpha wheel set, with a tire pressure of around 30 psi.  So far so good; not a glitch of a problem.
This past Sunday was Iron Cross. Prior to the race, I had to shift my body and mind back to some sort of endurance racing strategy.  I tried my hardest to rest, fuel and prep as if I would for a 100 miler, but it was a battle as I am doing a ton of different sports, and not worrying as much about being specific. Before the race, my legs were sluggish; very UN-snappy!
Luckily when the whistle went off I didn’t feel too bad. Betsy Shogren (one of the sweetest and fastest woman on the East coast) was also racing.  Betsy has countless huge wins under her belt, so I knew it was important to get a good start and try and suck as many of the guy’s wheels as I could.  My strategy worked; I got an early lead and never saw another woman all day.  Thanks to Richie Rich for driving me to the race and working with me a bit during the early stages, and Cheryl Sorenson for letting us stay in her beautiful house!! 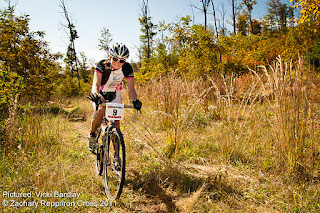 Giving a wave on the way to my second Iron Cross victory (photo: Zach Repp) I highly recommend Iron Cross, it’s one of the best ways to spend an Autumn day in PA.  But come prepared, remember this is like no other cross races, and there are moments when you think your legs are going to explode (like the ‘run up’ which is basically a steep cliff you have to climb). Thanks Mike Kuhn and the IC gang for such a great day in the woods.

You can watch my Cycling Dirt interview by Thom Parsons below.  I really need to work on not getting caught talking about embarrassing stuff like my hair on camera!!  I am not even a hair-fussy person (I have to drag myself to the hairdresser once a year!) Check it out here:

Also check out the tunes and race drama here:


Next up?  I am going to race some more cross, a mix of big girl races and some smaller ones.  First up is Granogue this weekend, where, I will most likely spend the whole weekend trying to move up few spots from the back of the pack as I have zilch in terms of UCI points so it will be a back row start. I also have a strong feeling that my legs may not have recovered from Iron Cross, or recovered enough to race at high end, we'll see. Stay tuned!
Posted by Vicki Barclay at 10:29 AM