And then there were 2
In previous years there have literally been truckloads of the State College crew heading down to the Cohutta 100. I would say out of all the NUE’s, this is the race we talk about the most: ‘remember the year of the storm, where we all thought we were going to be killed by lightening’; ‘remember the year when Jeremiah Bishop stayed with us and got food poisoning’;  ‘remember the year when we all fought about the best warm up lap (actually, nothing new there)’.

We have gotten into the habit of making a holiday out of the Cohuuta 100. We travel to Asheville Thursday and stay with friends and eat a yummy dinner, have another delicious breakfast in Asheville Friday morning, drive the remaining few hours and pre-ride the course Friday afternoon. We also try and stay at the same sweet cabin every year, tucked away 5 miles from the race. I love traveling with the guys because they make it so relaxed; they drink beer before the race and there’s not a compression sock in sight (well, except me). These factors all keep the race nerves at bay and remind me why I love to race – the people I meet and the places I get to go. This year, the crew diminished to only Matt Ferrari and I, but we kept the traditions going.

The 2012 cabin crew
Jeremiah Bishop was back with us this year (and we didn’t give him food poisoning), entertaining us with World Cup stories and showing us the secrets to recovery (lots and lots of ice-cream!). Chris Michaels was also there representing the Harrisonburg racers. We had Morgen Olsen, a Swede who lives in Greensborough, Clay Chiles (ex-State College) and Jimbo Malta (Genuine Innovations - another team sponsor). What a great group of people to share a space with!

The race
The Cohutta 100. Traditionally known as one of the easier NUE courses. This year, however, they turned it into a treacherous beast. The new race organizers gave us a lot more singletrack than previous years, but we paid the price: 14,000ft of climbing, which included a steep 9 mile climb somewhere close to the half way point. This race had the potential to take you to the deepest of dark race thoughts. 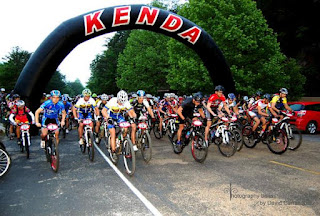 Unfortunately, 3 weeks out from the race I woke in the night with severe back spasms, similar to the one’s last year but this time on the opposite side. There were tears, and ibuprofen and the usual ’why me’s?’. They went on for about a week, bang in the middle of the night I would feel like contractions were moving through my back. This limited my ability to focus on intensity when I had wanted to. They also meant I would miss some important training races (Dragon’s Tale and Michaux). However, the most important thing was that I made it to Cohutta.

I felt reasonably good lining up. I was trying not to focus on my back giving up (as the week before I was literally crawling home from a ride where I had pushed myself). I got a good start and was sitting in 3rd, but got boxed in on the road before the singletrack started. The singletrack went ok, but I could feel that my legs were sluggish. This became really apparent when we hit the fire roads; no power and erratic heart rate. In the midst of wheezing, I heard someone ask ‘Are you from Costa Rica? Well, welcome to the USA!’. For some absurd reason, I thought he was talking to me (Scottish and very un-south American looking). I turned around and said ‘I’m not from…..’DUH. But at least he warned me of her presence on my wheel!

Anyway, the Costa Rican (with some hefty race titles under her belt) soon nipped past, then Kristin Gavin (who I could tell was riding very comfortably), then Nikki Thiemann (‘what’s up little vic?’), then a Specialized racer. Pull IT together Vicki. I was riding with Chad from Moots. I thought I heard him say ‘stop riding so offensively’. Whether he said this or not, I gave myself a talking to. Stop letting these women ride away. As soon as the real climbing started I settled in. I passed the Specialized racer from Florida (the knowledge of which state she had come from, fed to me by another guy racer, definitely helped!), I then picked off Nikki, then the Costa Rican. Back in 4th and climbing reasonably well. Keep it going.

The new piece of course took us down 9 miles of a screaming fast fire road, followed by more descending in singletrack. By jing, I thought, this is going to hurt. As I climbed to the aid station after the single track loop I saw Kristin. She said nothing but her eyes popped out of her head, and with that she was gone. “There’s you girl” said another guy I was riding with, so off I went, following/chasing her up the long climb. Sip sip sipping on my carb and Elete mix. By this point the sun really started beating down, I felt like I wasn’t consuming enough calories. I pulled out a Gu Roctane and started to feel better again.

Slowly but surely, however, on the next round of assents and descents, I lost sight of Kristin and 3rd place.  I finally crossed the line in 4th, 9hours 5mins, the longest it has taken me to finish a hundie in a few years. I was happy to have pulled it back together when things got rough and tough, but knowing deep down that I had under-performed due to my lack of specificity just a few weeks out from the race.  Cheryl’s husband Lee came to talk to me, I was so happy when he told me she had won. I have spent some time with Cheryl this winter and I could tell her attitude has changed somehow. She truly deserved the win.


My interview skills were stellar as usual. At least everyone got a good shot of my swanky pink and black addidas glasses. Thanks to Sammy Bryant for continuously providing the team with cool looks.

Next
Now it’s on with the rest of the season . This week will be filled with mostly easy spins. I plan on racing in the Mid-Atlantic at Iron Hill XC on Sunday. This will be a test to see if I can recover within 7 days of a 100 miler to race at a faster pace i.e., can I race Sylmano’s Revenge and start TSE, 7 days later? Hammer on.

Posted by Vicki Barclay at 1:01 PM