Rothrock Trail Mix, State College PA – a 30-mile loop across some of the best and rockiest trails this side of State College. Organized by Terri and David Pontzer (NMBA), it was set to be a success.

Forty five minutes before the race started I realized I forgot my kit (Nice one Vicki!), so time that should have been spent warming up was spent driving home to retrieve it, and my race warm up turned out to be a ride from the port-a-potties to the start line. Nevertheless, my start was pretty decent; I sucked wheels up the climb and entered the single track with a clear run at the rocks. I felt strong but was running out of gears. Some guy behind me was singing to his ipod as I picked the lines (who is this guy?!). Then after, oh, about 10 miles of single track I realized I had been in my big ring the entire time! Eek. That was the last I saw of Rich, as he peddled to a strong 3rd place finish while I slowly recovered from my big ring efforts.

It was dang hot, with temperatures approaching 100oF. I really appreciated Aaron Ho and Ryan Leech pouring water on my head at various points during the race. I chased Chip, but eventually finished a couple of minutes back, as 1st female and 8th overall.

6 hours of Power, Ellicotiviile NY- a series of 10-mile loops, with lots of rooty single track.

Race morning brought the first rain I have seen in weeks and a le mans start; organized chaos as both solo competitors and teams fought for the hole shot. The rain made the trails really slick; it was dangerous to be on or off the breaks too much - tricky!

As I set out on my 3rd lap, with shoots of lightening dancing around me, I was puzzled that the race organizer didn’t pulled me (he said this would be the case). Ten minutes later I could barely see through the rain and copious amount of dirt in my eyes.  An hour later I rolled through the finish to set out on my 4th lap and was told the race had been neutralized while the organizer decided what to do (at this point it was dry and almost sunny). The result – another mass start, and everyone would complete 2 more laps. Solo competitors were groaning (30 miles was enough for me to get my race fix, plus I had dirt and grit on every part of my body), but the teams were eager to set out again, all clean and charged after only doing one lap each. What a carry-on!  Dejay wisely bagged the carnage as his experience was that these things never work out.

So, after a 30-mile an endurance race, followed by a cross-country race, I finished as 1st place woman.


Another win and a sweet trophy! 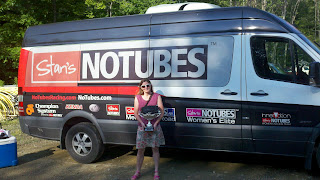 Rich finished 3rd male in his category, and Matt won the singlespeed so a good day. Dejay provided us with non-stop humor (the guy cracks me up!).

Next up NUE Wilderness 101. Nervous much?

Posted by Vicki Barclay at 4:20 PM