After been married for only 3 weeks, and still not a USA resident (which takes so much time and paper work!) I was unable to race US cross country nationals in PA (what a bummer, love that course), so decided to take a shot at British nationals instead. For once the race was to be held in Scotland on the 2014 Commonwealth Games course, so it was a great chance to stay at my parents house before racing, and enjoy having my mum and some friends there to watch.

I was slightly apprehensive about how the race would go as I seem to have been unlucky over the past few months with different types of colds/chest infections. I also ended up in hospital the night after the wedding with near-septicemia, after a bug or a thorn punctured my knee at some point during the wedding (maybe during the photographs), which resulted in a nasty infection with a red tracking line moving rapidly up my body towards my heart! A couple of days on IV antibiotics followed by a week of oral antibiotics were not doing my system any favors.

I arrived in Scotland on Thursday before Sunday’s race. Once I had recovered from the jet lag, I made the short trip from Edinburgh through to Glasgow to check out the course. It was nothing like the trails I was previously used to riding in Scotland before I moved to the US, and a far cry from my natural habitat amongst the rocks in PA: it was smooth gravel trail with the odd drop worked into a “A” line route. Despite it being completely different and my pre-race nerves, I was super excited to be racing in the national championships!

Scotland has been experiencing a heat wave this summer (even I had to admit it was warm), but I prefer to race in warmer temperatures so was pleased to see the temps in the 20’s (oC) on Sunday. The race started at a blistering pace, and I managed to stick with a group of three other girls for a short while. They actually gaped me on a downhill section called the “double dipper”, which was a long section of steep berms with two lanes. The trick to going fast, I noted, was to launch the jumps. I was on the brakes too much, and would definitely love to go back and spend more time practicing.

I had great support at the race with my mum and friend Katie Logan there waving Scottish flags and honking a big horn. It made me laugh every time I passed them! Mum’s friend Roger was there to take photos, and my sister’s neighbor who also races, fed me at the feed zone. What a team!

I was happy to cross the line in 9th place at nationals! Being in the top 10 means that I will also get some UCI points, which is always nice for future races. 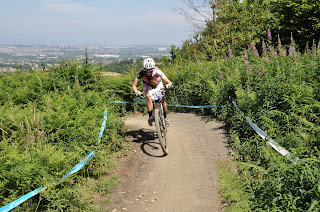 After a few days in Scotland doing some work and catching up with friends, I flew back to the USA on Wednesday, in time to race the National Ultra Endurance (NUE) Wilderness 101 on my home turf on Saturday.
Posted by Vicki Barclay at 10:55 AM