TSE: My first ever stage race

It’s hard to believe it has been a week since Trans Epic finished.
So much happened during that whirlwind week it has taken me a wee bit of time to decompress and let the race results soak in. 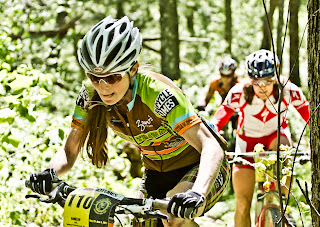 
With hindsight, I want the race to happen all over again. It was such a unique experience. It strengthened the bond that I already have with the people I train with in State College (Rich, Richie, Bob and Pete) but also gave me a chance to spend a week meeting 100 other like-minded souls who are driven enough to ride their bikes for 7 straight days.  On the flip side, I remind myself that every morning I felt like I had been hit by a car, and couldn’t believe it was only day X of the week.
Rich and I were going through it together.  Although we were living in the same house, and helping each other out (for instance, when he had heat exhaustion after stage one and with my general constant beatings) we were also completely self-absorbed with the goals we were trying to achieve: Rich to remain in the leader’s jersey and me to hold onto 3rd place.
The crashes at the beginning of the week were most definitely a shock to the system as I rarely crash hard. I don’t need to harp on about them too much as I covered that side of the story in the Dirt Rag’s ‘most memorable stage’ article.  In brief, the prologue was not a good start.  I tried to relax but instead it ended in a severe crash.  I lay on the trail for minutes, bike atop of me and stuck in my cleats.  I seriously thought Selene (who started 4 minutes back) was going to ride over me as if I was a log if I didn’t release myself soon!  The result: a bruised/broken rib which was to take a couple more beatings in the following days. 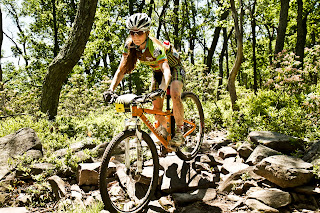 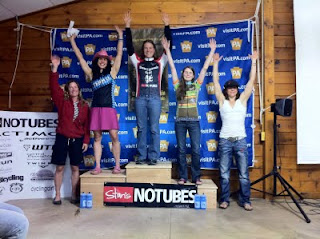 With reflection, I learned a lot about myself during the race week.
I am excited to see how Trans Epic will change my racing and fitness.  They say it takes 2 weeks for training to take effect so I am hoping it surfaces at Lumberjack 100 which is only one week away.  Also how the mental advice I have been given will affect my race strategy and confidence.  That I have a feeling may take a little longer.
Posted by Vicki Barclay at 7:26 PM