Race nutrition is one of the most important factors in endurance mountain bike racing.  It can seriously make or break your race.  Once you have your nutrition on the bike dialed, everything else can fall into place.  At the Lumberjack 100 I seriously botched up my nutrition and the consequences were not good!
Rich, Matt Ferrari and I left State College on Thursday evening.  We drove to Cleveland, Ohio, and stayed with Ernie and his wife Jennifer.  On Friday morning we made our way up through Michigan with a quick stop at Detroit airport to pick up a rental car: Matt and I needed to escape from the race quickly on Saturday to make a flight from Detroit to L.A for a conference which was to start on Sunday (to be continued below!).
We arrived at our cabin on Friday afternoon, made a quick change and headed to the start area to do some openers.  We met up with some of the guys from Pittsburgh and did a brief 6 miles.  The course was similar to trails we have in State College called Scotia:  super buff and twisty single track (but with significantly more punchy climbs).
We headed to one of the only bars nearby (the race really is in the middle of nowhere) for some dinner.  After dinner, we fixed our bottles and got ready for bed. This is when alarms bells should have started ringing!  Although I was preparing my personal magic mix of carbo and electrolytes, I didn’t even think about filling a gel flask or preparing emergency chew sweets for my pockets.
I didn’t have a great night sleep.  I felt like I was constantly turning and not resting.  My left ribs still really hurt to sleep and the result is the right side of my back is compensating.  The 'rustic' cabin beds were not helping!
The format of the race is a 33 mile lap which you complete 3 times passing through a feed zone after each lap. People leave coolers with bottles etc to pick up on the way past (this is the only lap race of the NUE series).  There is a water station half-way round the lap which I had planned to stop at least after the 1st lap as I could only carry 2 bottles.  Rich and Matt told me where the cooler was so I went to check it out ‘down the path, 2nd white tent on the left’.  I rode down and saw where it was but didn’t go and look inside the cooler to make sure it was ours. I should have checked! Suddenly (and thankfully) I remembered I didn’t actually have a gel flask with me.  Rich filled one up for me.  However, I didn’t take any extra food.  Looking back, I think I was still in Trans Epic racing mode, where I was only racing for a maximum of 5 hours, not 8+ hours.
The race started fast on a paved road before we hit the single track.  I stuck near Cheryl and Amanda but soon let them go as I settled into a more comfortable pace in 3rd position.  The first lap went well; I felt good and was not fazed by any of the single track. As I came through the feed zone I rode to where I thought the cooler was located.  I ran up to it, looked in, and to my absolute horror the contents did not belong to me!  I panicked but there was nothing I could do.  I nearly set off on the lap with literally nothing, but thankfully a voice of reason shouted in my head to ask some spectators for water. 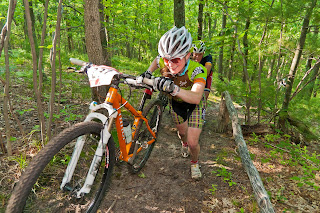 There were a few hike a bikes.  It was not as much fun as I am making out here.  I don't remember smiling at all.  I was hurting, really!!!!
So I set off on my 2nd lap with only water as I had already finished my gel flask.  My plan was to ask every person that I passed or passed me if they had any gels.  I managed to snag a few different sorts from people, which at least kept the flavors interesting! However, I was very worried that I didn’t have my bottle mixture as that is my main source of nutrition and electrolytes.  The only solution I had to get salt back in my body was to pour water over my head and lick all around my lips and face for the salty sweat that came off with the water.  I know it sounds disgusting and might not even work, but at least I could taste salt!
To my surprise, I actually felt really good throughout the 2nd lap and was still sitting in 3rd place.  I was worried that Karen would catch me as she is a very strong finisher.  Thankfully as I came through the feed zone I spotted Janet who was letting us share her tent space (her husband was racing).  She had my bottles.  They were so cold and felt wonderful.  I was clutching them and drinking like a baby with its bottle.  I started to hear that Cheryl was only 5 minutes ahead and not feeling good.  I was excited as thought I could catch her, and more confident now I had my bottles.    I started to try and push a little more and my legs literally stopped. I have only felt like this a couple of times (like the time we threw a party for Rich, I had a few hours sleep, skipped breakfast and rode 120 miles???!!!  Yes, that feeling!).
It was too late.  I had dug too deep with too few calories or salt during 2nd lap.  I was severely depleted and it was going to be some time before my nutrition caught up.  I snagged more gels from people.  This time around they tasted awful and made me want to vomit.  Whereas during the 2nd lap it had seemed effortless to get to the half-way point water station, during 3rd lap I was crawling.  Karen caught me and I couldn’t put up a fight as she sailed away.  She looked strong.  At that point I really didn’t care, I was just starving.  In fact, I have never felt so hungry on the bike.  I felt like my stomach was eating itself.  I made it to the water station and ate half a banana.  I left quickly and the wondered why the heck I hadn’t eaten more!  With about an hour to go I started to perk up a bit and was so relieved my bottles were beginning to work their magic.
I held onto 4th place and crossed the line in 8h13mins.  It was a fast time, but I knew I could have done much better.  Really though, I only have myself to blame. 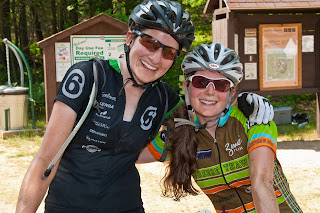 I did  hang out with Danielle Musto briefly.  She is a HOOT!  Made me laugh, even in a nutritionally depleted state
I missed the race after party and awards as I crossed the line at 3.13pm, and Matt and I had to make it to Detroit airport (4 hour drive away) by 8pm.  We were both attending a wonderful conference held in different locations every year on the Ecology and Evolution of Infectious Diseases.  I certainly didn’t want to miss out on this year’s as it was being held in Santa Barbara!

However, after fantasizing so much about food I didn’t even get the chance to really eat!  I must have been confused as I was even looking at Taco Bell billboards from the car thinking I could eat their food (I am practically a vegetarian!!)  We made the 5h flight to L.A.  I slept a little in my cramped chair.  Poor Matt then had to drive from L.A to Santa Barbara.  We arrived at 3.30am.  I got to bed at 4am and had to be up and ready by 8am.  Thankfully we went for breakfast; it felt so good to finally get something in my stomach. Lumberjack 100 goes down as my worst race and post race nutrition schedule.  I can’t/won't make that mistake again!
That was my first trip to CA and I was impressed despite the June Gloom (it was so cold compared to the heat and humidity of PA!).  The food at the conference was great, although I did laugh at how organic obsessed the CA folks are.  On the final day of the conference we always go on a group hike to foster scientific conversation and collaborations.  This year we did a beach walk.  It was fun, although I missed the train of fast walkers and ended up with the bird watchers.  At least I learned a lot!
The next week is going to consist of an endurance block in prep for the good old Wilderness 101 (or 103 this year!).  I also plan on doing some of the Tour Da Burg (Virginia) and a few XC races to get some speed back in my legs.  I will report (no doubt late!) on anything exciting.  One thing is for sure, I will double triple check my bottles and gel flasks.
Posted by Vicki Barclay at 9:20 PM