A couple of weeks off racing and Windham XC

The past few weeks have been super fun.  After Lumberjack 100 I didn't race for two weekends in a row.  This meant I could put some longer aerobic miles in on the bike, my last chance to get that in before Wilderness 101.  I have also started back up with some intensity training,  my legs have cried a little, but I need speed back in them again. The rest from racing also got me psyched to get back to it. 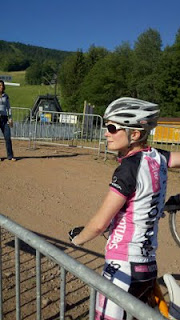 This past weekend I headed up to Windham for the world cup XC races, of which NoTubes were a main sponsor.  The world cup races were on Saturday, and the 'Citizens' races were on Sunday.  It made me laugh that I was racing in the citizens race when I am not a citizen! Anyway, I have decided to make a push to get my pro xc racing license, so I have that under my belt as well as my continued competition in the endurance events.

Rich had headed up on Thursday as he was on duty to pick up some of the NoTubes elite ladies race team from the airport Friday morning.  I made the journey up on Friday (long drive).  The cabin we rented was huge and we were still packed in like sardines!  Lots of what I would consider awesome racers were staying with us including Mike and Mary and Krista Park.  Great to meet them.

On Saturday I helped out with the feed zone for the Stan's woman team.  It was very exciting to watch the race so closely and see some pretty amazing female mountain bikers.  It really made me want to focus on xc racing again, but we'll see.  I did a lap of the course around 7pm (late for pre-ride but no choice).  I was feeling tired with all the training the past couple of weeks, but I reminded myself that I could easily push myself hard for a 1.5hour xc race

On Saturday night I had to head to bed early as my race was at 8am on Sunday.  Krista Park and her hubby Todd kindly let me sleep in their room with bunk beds so I could escape the after-race party going on upstairs.  I hated missing out, but I knew I had a job to do the next day.  Krista slept in the bunk below me and gave me some really good advice on how to tackle the course: 3 minute up-hill intervals followed by recovery in the single track.  Got it!

On Sunday morning I lined up with the other Cat 1 ladies, 4 minues behind the pro woman start, and behind all the single speed and master men groups.  Rich told me my goal was to beat the pro woman.  So I set that in mind.  As soon as the gun went off I went out hard, passed a bunch of the older dudes, and eventually passed both the pro woman who were racing.  It was so awesome to have Stan there watching me race as well.  He was very encouraging and I am proud to race on his engineered wheels.  The course was a series of climbs up a ski hill, followed by a decent.  Not an ideal course but fun nonetheless. 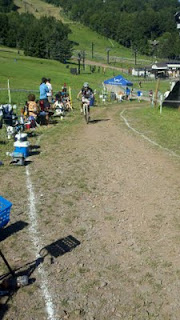 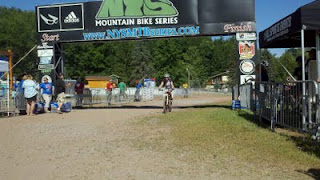 I did manage to miss the podium however!  They presented earlier than announced.  Rich insisted I stood on the top step though- hugely embarrassing!!! But there was absolutely NO getting out of it! 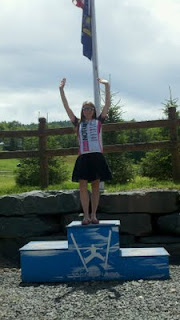 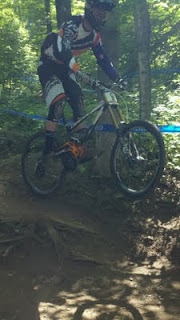 The rest of the afternoon we went up the mountain and watched the down hill races.  SCARY!
The weekend as a whole was such good fun.  The area was beautiful, I got to hang out with the NoTubes crew, we had great dinners and good laughs.  There was a hot tub at the cabin.  Always a plus!

Up next, another USAC xc race in NJ on Sunday to try and get some more points for my pro license.  Nationals are going on in ID so the competition might not be too strong.
Posted by Vicki Barclay at 3:39 PM